Today was the coldest day I've ever skied in.. -12º at the summit of Killington. That's real temperature, mind you - before windchill.

so how cold was it?

before I went out..

See that little patch of exposed skin between the goggles and the facemask?

when I came back.. ice on my eyelashes..

it was 8 below where I parked my car at the bottom of the mountain..

it's a nit nippy up there.

I must have forgotten to post this before, it's from December 15th:

First - nobody can figure out what the source of the bad smell in NYC was yesterday. I think the truth is that everybody knows the source, but it's not PC to point it out: New Jersey. Duh.

Well, we had record highs last week and I was in vermont skiing some rapidly-melting snow at Killington. It's quite depressing. I skied in heavy rain both Saturday and Monday. But that's about to change.

(State College, PA - January 8, 2007) - The unseasonably warm winter experienced by much of the country is likely to "turn on a dime," in the words of AccuWeather.com Chief Long-Range Forecaster Joe Bastardi.

Bastardi said that the weather pattern from mid-January through mid-February has a chance to mimic the winters of 1965-66 and 1957-58, each of which ended cold and stormy after a warm start. A worst-case scenario would be if this winter plays out as did the winter of 1977-1978.

Similar to this year, 1977-1978 was a winter with a waning El Nino. After a tepid start, the second half of the winter was noted for its cold and remarkable storminess, including back-to-back-to-back blizzards in the Northeast.

"Those who think that winter 2006-2007 is going to remain mild are in for a shock," said Bastardi. "Winter is likely to come with a vengeance. A week from now, we'll start seeing truly cold air across much of the country, and we expect this change to last."

Added Bastardi, "Whether we end up with seasonably cold weather, or something far worse, remains to be seen. There are indications that this winter could parallel severe winters of the past. Even should we not see an extremely cold and snowy conclusion to winter, you can be sure that by the end of the month, when those in the Northeast are shoveling out their driveways and sidewalks, the mild weather we're experiencing now will be a distant memory."

Where Will Winter Go From Here?
The first signs of change will be noticed this week. A passing shot of cold air will knock temperatures down to typical January levels in the northeastern part of the country for a few days. Temperatures will return to unseasonably warm levels by the latter part of week and last into early next week. The seeds for the more-lasting change, however, will be planted in the western part of the country.

Arctic air from western Canada will pour southward into the Pacific Northwest, northern Rockies, and northern Plains this week, and this will mark the beginning of a true winter weather pattern that will encompass much of the nation over the next couple of weeks. The core of the coldest air by the latter part of the week will be centered in the Rockies and northern Plains, and the arrival of the cold air will mean another round of accumulating snow for Denver later this week.

The cold air will slowly push southward and eastward from this weekend into early next week and will likely arrive in the eastern part of the country by the middle of next week. Much of the nation will then have a cold weather pattern for the second half of the month.

Long-range forecasting expert Bastardi points out that it's too early to say with certainty that the change in the weather pattern will be long-lasting or produce heavy amounts of snow. However, he believes that if the weather pattern reaches its full potential, the dramatic change from warmth to cold could result in "one of the top-five coldest 30-day stretches in the past half century." 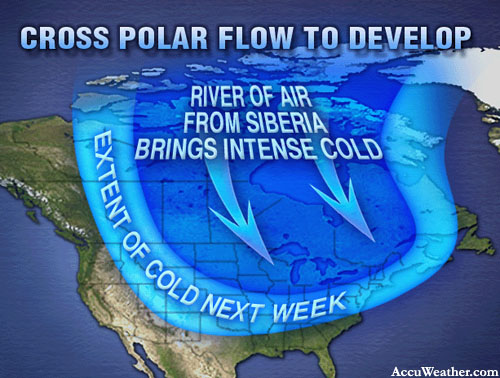 Oh, and check out this little byte from "The Single Chair Weather Blog"

"In spite of whatever happens this weekend, I am very encouraged as to how things look for the latter half of the month. The teleconnection indices are neutral but features embedded within the jet stream will be positioned in a way which should allow for a consistent stream of colder weather as I mentioned in the opening paragraph. I also refuse to believe that the southern branch is neutralized as some of the models would have us believe. I will instead go out on a limb and predict a significant snowfall either during or just before the weekend of the 20th and 21st of January. Furthermore there are indications that the aforementioned ridge in the Jet Stream will remain in place somewhere in western Canada through a good part of the duration of the month thus setting the table for a comeback of sorts. The pattern may prove to fall short of perfect but in a relative sense it is very welcome."


And that's not all - Check out what's going on in the southwest this week. From accuweather:

"Colder air starts to charge south in all of California Thursday and reaches it coldest on Friday. This storm is taking a mostly over land path and therefore will not have a lot of precipitation with it. Still, showers are likely and snow levels plummet. By Thursday afternoon snow levels will be down to 500-1,000 feet in central California and 3,000 feet in the south. By Thursday night and Friday the southern California snow levels will have dipped to 2,000 feet or below. Snow will probably be seen in the lower elevations of the coastal range of central California Thursday, and by Thursday night and Friday down to the upper desert floor in southern California. There could be some snow flakes also seen on the valley floor of the San Joaquin Valley late Thursday into early Friday.

"Friday night and Saturday night are going to be very cold nights for much of California with record temperatures being broken. Hard freezes seem likely in all of the Central Valley, and even into the Coachella Valley for Saturday night and Sunday night, with the coldest spots in both places bottoming out in the low 20s."

The Coachella valley includes Palm Springs. Heh. Palm Springs in the low 20s. That would be cool.
0 comments

Recent pictures of starts of the 80s, presented without comment.

I don't remember what actually caused me to plunk down the $95 to run the Las Vegas Marathon last month, but I do remember consulting the comments section on Marathonguide.com. They let anyone who ran a marathon write a review of their experience, and it requires the writers to specify how many marathons they've run prior - so you know how experienced they are. It really was useful. In Las Vegas' case, I remember that the major complaint was the lack of portable toilets on the course - but people were instead ranting and raving about how cool it was to run the strip, the really nice tech shirt they were given, and a very cool swivel-medal. I don't remember what was said about crowd support or the fun of the course after the strip - the lack of affected me when I ran the race. I also noticed a couple of mile markers were off, but it didn't affect me so much because I wasn't pacing or anything - mile 10-11 and 20-21 (both seemed more like 1.5 miles) demoralized me a bit - but it wasn't a huge deal. The headwind was a factor, but bad weather can happen anywhere. So I will say that for a first marathon, I really didn't know what to expect and besides those inadequacies - and my wife's poor experience as a volunteer (which I didn't know about until after the race) I didn't think it was a horrible experience.

I knew that people were complaining though. But I didn't know the extent, until today when I returned to marathonguide.com and read a dozen pages of angry complaints about this race. It surprised me.

Here are some excerpts:
"This was my 84th marathon, and without a doubt the organizers of the 2006 New Las Vegas Marathon (i.e., Devine Racing) did the worst job putting on a marathon that I have ever experienced."

"This marathon sucks! I disliked just about everything about this marathon."

"This could be an outstanding marathon, but apparantly the organizers are more interested in profits than runners."

"I will NEVER AGAIN run this. What a disaster."


here were the recurring complaints:

read for yourself here:
http://www.marathonguide.com/races/racedetails.cfm?MIDD=2377061210
0 comments