This is going to be a "facts-only" post. Later on, I want to write a separate, more philosophically-oriented post. Also, thanks to Jeff and Linda for some of the photos in this report.

After leaving work at noon and heading for the airpot, I arrived at a hotel in Willis, TX after midnight on Thursday night. Woke up at 4:30 AM and couldn't fall back asleep. Had breakfast at the hotel.

Drove down to Huntsville State Park, the site of the race. At 8am on Friday morning, a few people were around setting up, but there really wasn't much going on.

Decided to spend the morning in Hunstville and check out the town. Hunstville is a prison-town, there are three separate state prisons in the area, and also the state's execution chamber. The Texas Prison museum is also here, and their star exhibit is "old sparky", the electric chair used in Texas prior to lethal injection.

"Do not attempt to touch Old Sparky"

About the only other thing to do in Hunstville is visit Sam Houston's grave.

Met up with fellow ultrarunner Andrew Edwards from Birmingham for lunch. At his suggestion, we visited a place in a 72-year old downtown Huntsville restaurant called Cafe Texan for "The best chicken-fried steak you ever had." It did not disappoint.

If you ever find yourself driving by Hunstville, definitely stop here

This chicken-fried steak was unbelievably good

Hunstville also has a 67-foot tall statue of Sam Houston along the side of the highway.

You can see it as you come over a hill,4 miles away

Ok, enough of the tourist stuff. We're here for a race, right?

At 2pm I stopped at the race and checked in. Got my race bib and timing chip. Went back to the hotel room and laid everything out.

I then went back to huntsville state park for the pre-race briefing.

After the talk, we left our drop bags for Dam Road aid station (Miles 6 and 12 on each loop) and that was that. I did not attend the pre-race dinner, but wish I had.

The starting line, the afternoon before (tents had not been set up yet)

Shoes and gaitors in the hotel room

Merely 6 hours after going to bed, I was unable to sleep again past about 3:00am, so I got dressed and headed down to the race start, arriving well before 5. I was one of the first runners there.

I didn't hear a starting gun go off. People just started running. It seemed anti-climactic for a 100-mile race. Doesn't matter. I took the picture above and started walking.

My plan was to walk to the first aid station, just to get the butterflies out. It was really good to let the pack go out ahead of me - it was dark, the moon had already set, and I was not in the mood to get in a tight pack on the trails.

The course was nice, but hillier than expected. My initial plan of running 10/ walking 5 was not compatible with the idea of walking uphills and jogging down. I tried to do both for a while, but it was pretty futile. I just took it easy and enjoyed the scenery.

For the first half of lap 2, I made a concentrated effort to stay ahead of 15 minutes per mile. That meant jogging all the downhills (which was easy but still took a bit of a toll) and walking the uphills kind of hard. I still felt fine, but I was starting to get kind of tired. Overall, I still felt fine was lapped by the top to runners right after I passed the marathon point (26.2 miles), and they looked great. However by the 50K point I started to sense my heart rate being rather high. Legs felt fine, I could still move fast, but I was breathing harder than I wanted.

It was about this time I caught up to Andrew (who I had lunch with the day before) and he informed me he was dropping at mile 40. It was a hot day and it was hitting him hard. I walked with him for about a mile to the next aid station, after which he told me to go on. It was nice to chat with him for a while though, and I was sorry to see him drop.

Around mile 35 a volunteer marking the course with glow sticks walked with me for a bit. asked how I was doing and I told him - he then asked about the usual stuff - amd I getting enough electrolytes, food and drink - which I was. It was just my heart rate that was high. After we parted company, I decided to take off my water belt. I was bothering me a bit, and I felt a little better after that. Then, I ran into Lora at the Park Road aid station. She was on her second 16.7 mile lap of the 50 and had all the time in the world, so she wasn't moving fast at all. I decided to walk with her for a bit, and after about a half-hour of moving at her pace I felt 100% better. I literally didn't have a pain in my body. I felt completely fresh and spirits were very very high.

I left Lora when we got back onto single track and headed back to the start/finish - which is where I saw Jeff and Linda, who came down from Dallas to cheer me on and pace me in the last 40!! 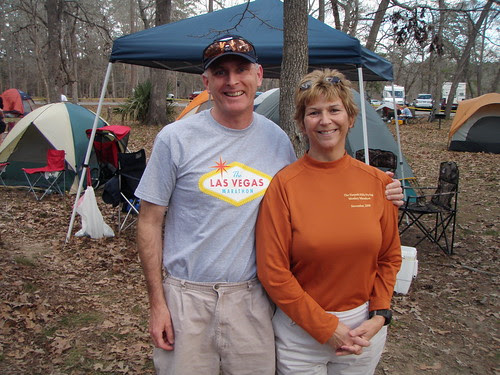 Look up "Pure awesomeness" in the dictionary, and you'll find this picture.

If my spirits were high before, I really got excited when I saw them. This was definitely my high-point of the race, because I had just run 40 miles and felt completely fresh and awesome. 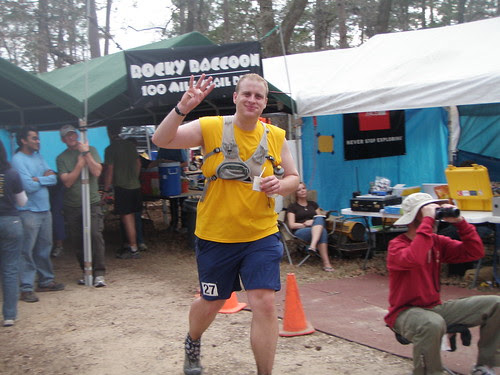 I switched to my Nathan pack at this point, ditching the waist-belt bottle holder. Plus, I was all-smiles

They say that if you feel good during a 100, don't worry - it won't last long. That held true and it wasn't at the first aid station before I started feeling tired again. I suspect it was the rolling hills that were getting to me, and I backed off the pace a bit.

Some time after mile 46 aid station, it got dark during a 6-mile stretch with no aid. This 6-mile section got very long on the third lap, and I definitely felt a bit of despair here - I lost interest in the race. By mile 50, I honestly didn't care anymore whether I finished or not, I knew I didn't want to stay out there though. I wanted very much to be home with Alex and Joe. I relayed that thought to a couple of volunteers at mile 52, and both tried very much to encourage me but didn't really raise my spirits at all.

As an aside, I was at mile 55 when Andy-Jones Wilkins and Larry (his pacer) passed me like I wasn't moving. They were winning, on their final lap, and had literally just realized a few minutes before passing me, that the second-place person was only about 5 minutes behind. He really picked up the pace and went on to win the race.

Larry (left) and AJW, right after they finished. Race Director Joe is on the right.

By the time I got to the mile 55.5 aid station, I was in a bit of pain. I betrayed my own rule and sat down to eat something, while a volunteer coached me just as they had in the last aid. The gist of it was "don't think of going 45 miles, just think about getting to the next aid station", but the distances between them seemed to be getting really really long. I got up and started walking to the next aid station, which was the start/finish - and this is where the wheels really came off.

I found myself in a death march and seriously considered cutting the course back to the finish and dropping without even finishing the lap. That was a decision that I would have regretted and decided against it. But it took a good 2 hours to travel that last 4.5 miles back to the start/finish by way of the actual course and by then, I was a complete mess.

At this point, there were three things working against me:
1.) Indifference
2.) Lots of pain, extreme fatigue, intense desire to sit down.
3.) Most importantly - the cutoff. It had somehow become 11:30pm, and that last lap took close to 8 hours. If I were to be allowed to go out on lap 5, I'd have to complete lap 4 by 6am- which at the pace I was going, just wasn't happening. I knew I couldn't finish even if I continued. 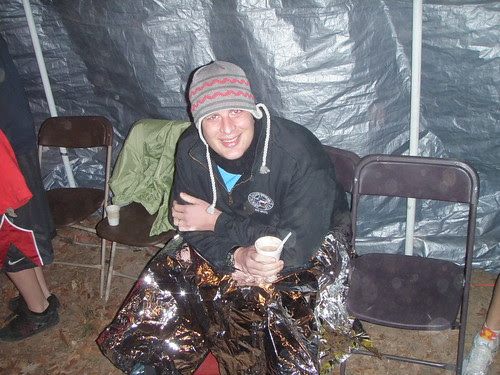 And as soon as I dropped, I got really cold.

I felt bad because Jeff was all dressed to go out with me. I kind of wanted to go with him, just to get a run in. But it just wasn't happening. 5 minutes after sitting down I started feeling pain shooting up and down my legs and it was really intense.

The three of us sat and chatted for a good ninety minutes. I had a great time just hanging out with them. But eventually, my eyes started to shut and I said I better get back to my hotel, cuz I needed some sleep. I managed to make the 20 minute drive back to the hotel without incident - Jeff and Linda were looking at a 3-hour drive back to Dallas! They assured me that they'd be fine, so we parted ways.

Andrew and I on Sunday morning.

Once again, I was unable to sleep past 7am on Sunday Morning. This was all time that I had planned to be running - and was going to sleep Sunday afternoon and fly home Monday. The time that I had budgeted for sleep after the race.. turned out to be a waste. After going back to the start/finish and hanging out there for most of the morning, I found myself driving around Conroe, TX looking for something to do (didn't have much luck) - tried to take a nap without success, wandered through a few stores. Went to a bad movie. Honestly, the only thing to do - and the one thing that I would really like to have done - was go for a trail run at Huntsville State Park. Doh.

A great place to spend a day.

It was a boring day, but it allowed me a lot of time to reflect on the race result and what I could have done differently. The answer - will be in the next post.