I had a really fun but disappointing and still fun day at the New Jersey Trail Series' Mountain Madness 25K on Saturday! This race, held in my own backyard on the trails that I spend a lot of time on in my training, is a must-do for me.

The course is about as hard as they come in this area! The 50K version of this race is the RRCA Eastern Regional Ultra Championship at that distance, and when the winning time in the 50K is over 5 hours, you know you've got a fun day ahead of you.

I met up with Cathy and we arrived at the race far too early - I forgot the race started at 10:30am! But it was cool - we hung out and chatted with some friends who were in the 50K and got to watch the start of that. Time went by fast and before I knew it we were on our way!

It didn't take long for silliness to ensue. The very first thing the course does is go up an asphalt road towards a skeet and trap range. I'm in the back of the pack, walking up the hill, when a State Park Police truck comes up and starts talking to me. The truck (and the cop) looked just like this:

Officer: "Are you involved in this?"
Me: "Uh, yes.."
Office: "Well this isn't going to work. You guys are running right into a shooting range."

"This isn't going to work." uh, yeah. You're talking to the last-place guy out of 100 people, half of whom are already in the woods, presumably past the gun range. And I'm pretty sure the authority who issued the permit reviewed and approved the course. "Not going to work" my ass.

I didn't say that, of course.

So he goes up ahead, but doesn't get far because the road is full of runners. He follows them up, passing as he can, and by the time he pulls into the shooting range parking lot, most of the runners are on a trail that goes past the shooting range, without ever going near the business sides of the shotguns.

So I'm cruising, in second to last place, and I notice that it doesn't take long for the pack to spread out where I was. By a mile in, I'm alone. This isn't unusual, it's lonely in the back of the pack. But then the woods road I was on emptied out onto a grass lawn. I was in somebody's back yard. I look for a trail marker for about a minute before I realized I must have made a wrong turn and start charging up the hill looking for the last marker.

I backtracked a long way to a junction and, still not seeing any trail markers, figured that must have been where I made my mistake and started going the left when I had gone right. After a quarter mile I got to another junction that wasn't marked - and I knew it should have been. I was about to turn around when I saw some runners coming towards me. They were in the 50K.

Me: "Have you gotten to aid station 2 yet?"
Them: "No"
I knew aid station 2 in the 50K was the same as aid station 1 in the 25K, and perhaps I was on the right course after all. I went with them another quarter mile until I saw markers for the 7.77 mile course - and that's when I knew I was in the wrong place. They, however, continued, and I decided to backtrack some more.

I was all the way back at the shooting range when the course sweeper came running towards me. It turns out that she wasn't too far behind me when I missed the turn, cleaning the course. That's why when I backtracked I didn't see any course markers. When she got to the aid station, she asked about me and they said I hadn't come through - so she was looking for me!

She escorted me back to aid station 2 (what great service!) and sent me on my way. Super-aware of the course markers, I managed to stay on course the rest of the day. I know a lot of people got lost during the race. I can't speak for anybody else, but as for me, it was my own dumb fault that I went off-course.

By the way, I was now 1 mile into the course. And I had run over 3. And in this report, had already written 800 words about the first mile. Let me summarize the last 14 miles thusly:

* I was, of course, way out in last place at this point, but within four miles I had already picked off a couple of people and at least one other person before finishing.

* I made the rookie mistake of forgetting to wear bandaids on my nipples, and had two painful and bloody stains on the front of my shirt by the end of the race.

* I crashed dramatically in the last 5 miles and walked all of them, clocking a couple of 25-minute miles

* It was fun to run in a race in Ramapo Reservation, on the trails that I'm so intimately familiar with.

I finished in some ridiculous time. Over 5 and a half hours. I can honestly say that I've never run a marathon or 50K as hard as this 25K.

You can see my GPS log on Garmin Connect here: http://connect.garmin.com/activity/53299556
0 comments

Overheard a kid on Joey's soccer team saying, "Our team stinks. The only player we have who's any good is our goalie."

The kids on other teams literally have someone jump on him to keep him from stopping a goal:

Here are a few more pics from yesterday's game..

Steve is taking a break from writing regular updates to this blog.
2 comments

Joey ran a 5K last Saturday at Rockland Lake with all the grown-ups. He ran every step! 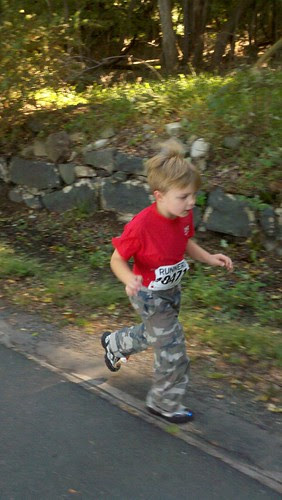 I had a great time running with him, finding ways to motivate him as he started to get tired a couple miles in. He did slow down, but never stopped running. 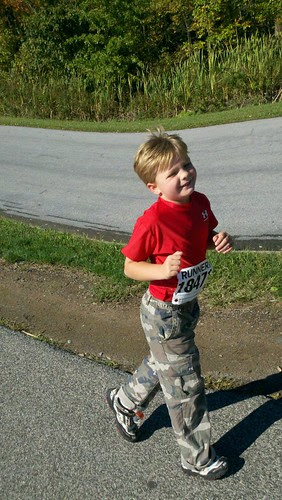 Main motivation tactic? "Hey, look at that girl in front of us. She keeps looking over her shoulder at you. She wants to beat you. Do you want to let her do that?"