(Note: This report was completed and forgotten in draft for a month. I noticed it when I wrote the report for RRR 100. So even though it was posted after RRR weekend, it's mostly written from a pre-RRR perspective.)

Finished in 13:55. Amazing course. More difficult than I thought it would be, due to steepness of climbs. Almost no flat. No issues with stomach, hunger, electrolytes, or ankle. Cool day, mostly overcast due to marine layer - temp was in low 50s at the start and finish and probably never exceeded 65F. Insanely awesome course. Highly recommended!!

When I was planning what has become my annual summer trip to visit my parents' in California, I looked to the race calendar to find a nice long race that I can use as training for Run Rabbit Run. I came across this one and it sounded perfect. I love the Marin Headlands and would would take any opportunity to run there. 50 miles with lots of climbs would make an ideal training run, and since it coincided with a 100-mile race, it had a very generous cutoff allowing me to run at as slow a pace as I liked without worrying about being pulled. Plus the price was right at $90. I would have preferred something at altitude with a couple of steep climbs in the 2500-3500' range, and this was at sea level with numerous 600'-1000' climbs with a wide range of steepness. But all in all, it was certainly sufficient. So I registered.

This is a low-key race which had a mere 10 finishers in the 100 miler and 58 in the 50 mile. I was in fact surprised at how small it was, since I knew it to be an amazing course. It's an inexpensive race in an unbelievable setting where the start line is literally 15 minutes from downtown San Francisco. The race had fantastic schwag where I got a really nice pull-over jacket, and they gave really nice belt buckles to finishers in both races. And it didn't seem like any corners were being cut - 6 aid stations per lap and they were well stocked.

And yes, I love the Marin Headlands. It blows my mind that such an amazing place is a 15-minute drive from downtown San Francisco and yet is not constantly inundated with people. I didn't take too many photos this time, but if I did you'd see lots of grassy hills with amazing views wherever you go, and also historical significance.

Two loops, run washing-machine style (first one clockwise, second counter), 90% dirt, majority of which is road or doubletrack. I understand it's identical to the Headlands 100 course. 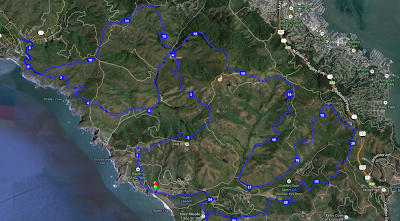 The starting line is at sea level on the road between the parking lot and Rodeo Beach, and from there it quickly climbs 840' the ridge to the south. It descends into Tennessee Valley and then back towards the ocean for a mile or two until getting near sea-level before climbing over another 570' ridge and down into Pirate's Cove (sea level.) It climbs a smaller 430' ridge out of Pirates Cove and descends again into Muir Beach. After a short out-and-back to the aid station (which again is at sea level), the trail gradually climbs to the course's highest point at 1025' in two miles before descending back into Tennessee Valley*, elevation 200'. This is then followed by a solid gradual 2-mile climb to 870' before a really nice long 3-mile gradual descent back into the valley we started at. The next portion is where the course's views become most impressive. Runners climb from sea level to 920', traversing the ridge that separates the park from Sausalito. The highlight of the entire course is the portion of the ridge where you can see the ocean to your right, and San Francisco to your left. It truly is a spectacular spot.

The next 6 miles are generally downhill (with two 200' climbs) back to the starting line. Then we do the whole thing again, backwards.

I had a good uneventful day. Finished shortly after it got dark. I ran very conservatively, walked all the hills, didn't pound the downhills, listened to a lot of great podcasts. I never dealt with pain of any kind, didn't have any issues with food, hydration, or electrolytes, and really enjoyed the day. I didn't talk to many people because the course was too spread out and the field too sparse to encounter other runners. The only part of the course where I really struggled was the second climb out of Pirate's Cove at about mile 42. It is very steep in that direction and I had to take a lot of breaks to catch my breath. Around Tennessee Cove mile 45 I encountered several 100-mile runners starting their third loop and I was overwhelmingly happy that I a was almost done and didn't have to do what they were doing, but at the same time frightened out of my mind that I will be in their shoes a month later at Run Rabbit Run. After I finished, there was time to go get In-And-Out burger with my family. This race once again reminded me of why 50 miles is my favorite distance.

Photos
*This part of the course could have used more confidence flagging. I went about a mile without seeing anything and ended up backtracking until I found a runner more familiar with the area who I could follow.