I was doing well early in this race, when I ran my first mile with Emmy and Ken, neither of whom I've seen in a while. But I broke down surprisingly early. It got hot that day, and that definitely was a factor, but I think the bigger issue was that I had overdone it. After the race I looked back at my log and saw that I had no less than 6 weekends in in the 2.5 months leading up to this where I went 50 miles, and a couple of weekends where I went 100K. Plus I had just returned from a particularly difficult (and humbling) 100-mile attempt in Colorado. I was just worn down. 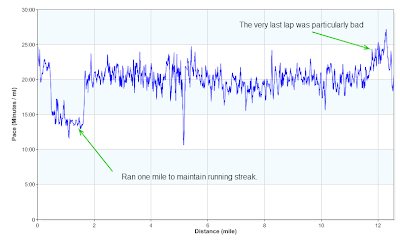 But having a bad race did not keep me from having a good time. After last year's focus on Ironman, I feel like I've lost touch with my ultrarunning friends. There are many people who I used to see every month who I've not seen in a couple of years - Emmy and Ken among them, but also Shannon and Cherie and Eliot and Ray and Phil (Good luck this weekend Phil and Cherie!!) and two Freds. I keep saying that timed races (actually any race with short-loop courses) are great, because they're wonderful for catching up with old friends and making new ones.

As far as me, however, this race was a dramatic wake-up call. It is probably the first time I've actually seen clear deterioration due to over-racing. I took the hint and spent a couple of weeks essentially not training at all (1-mile daily runs to maintain the streak notwithstanding), and it seems to have made a difference. I've thrown in a couple of 5K runs this week and felt really strong.

For better or worse, I am returning to long distances, probably sooner than is smart. But these are races that I've already registered for and I do plan on running them. This weekend is the Marine Corps Marathon in Washington DC, which will be a good test of my recovery which will determine my strategy at the NJ One-Day in two weekends. If I do really well at MCM I'll put in a strong effort at NJ1D, but if not, I'll probably just take it easy there and hang out.