Weight loss contest update (I am in two weight-loss contests right now.)
* Lifetime Fitness 90-Day challenge: Since my parents have been in town, I haven't been disciplined or keeping track. Oops. I think the damage is +5-7 lbs, but like I said I've not been keeping track so I could be off.

* Hertz "thinner winner" employee weight loss contest: This contest is now finished. See above. I lost my first place position but at least one my location, which is good for $50. 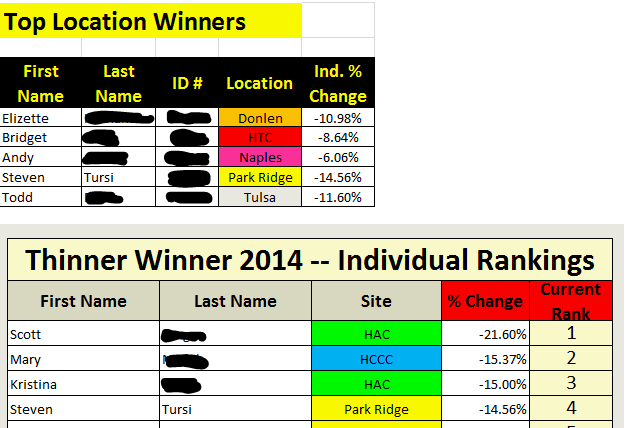 Wednesday April 2
I was really sore after Monday's 5K test and Tuesday's social run strides! I ran 4 laps at a track around Joey's lacrosse practice and called it a day. 10:00 minutes, 1 mile. Guess the pace per mile. (:

Saturday April 5
Broke 24 in the Wharton 5k (here's my race report) and spent the rest of the day driving around Pennsylvania. Fun!

Sunday April 6
Longish run at Rockefeller with Ami. 12 miles. We had planned to go longer but she was feeling something in her ankle and we thought it prudent to cut the run short. 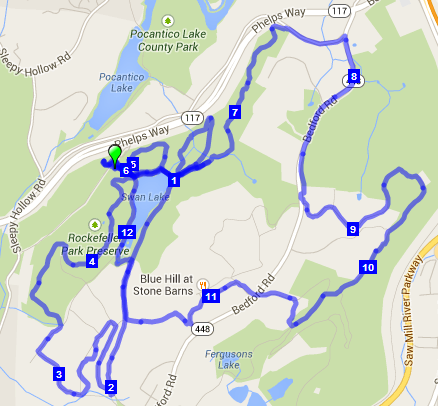 Monday April 7
Fake zero single mile at the track during Joey's (cancelled) lacrosse practice. The weather was bad so I just said "hang on a minute" to Joey while I ran four laps.

Tuesday April 8
Ran an easy flat 2.5 with Ami, who was still taking care of her bum ankle.

Wednesday April 9
Ami and I visited Atkins Glen for the first time since before the snow. Great to be back! 3.2 miles.

Thursday April 10
Again with Ami, this was one of the best lunchtime runs we ever had, where we did 4.8 miles. We averaged 9 minutes per mile on this run that included West Park, Atkins, AND Leach! (Hills).

Friday April 11
Ran Kingsbridge (hill near home) for the first time in forever. Did the entire 3.3+ miles in under 29, which is a personal best. 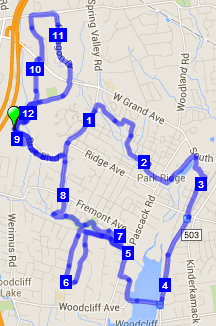 Palm Sunday April 13
Today Larry and John started their 250-mile stage run From Franklin Lakes NJ to Hopkinton (start of the Boston Marathon) to raise money for Hole-In-The-Wall camp for children with serious diseases. At the starting line, there were about 100 supporters, plus the fire department, police, mayor, news vans - a big group. I ran the first 8 miles with them from Franklin Lakes to home, but in order to get to Franklin Lakes I decided it was easiest just to run down there. It made for a solid Sunday long run of 16 miles total, and this was after 12 on Saturday. The 80ºF weather was getting to me a bit at the way back (especially since I ran out of water and didn't want to ask for more), but we were moving pretty slow (11-12 minutes per mile) and were getting close to my finish line anyway.

Monday April 14
Today was a work-from-home day, and I figured that after a 28-mile weekend I'd take advantage of the nice weather and tack on a trail run. I haven't been on a trail in so long I've forgotten what it looks like! Anyway,

Tuesday April 15
Went to the lifetime Tuesday group run but was short on time, and the weather was bad so we were indoors anyway. I ran 30 minutes on the treadmill, in which I did 3.67 miles (8:11).

Maundy Thursday April 17
Had very little time, so I ran a mile at a high school while Joey and Grandpa threw the lacrosse ball around, and then we were off someplace else.

Good Friday April 18
Four laps at a track at 7pm.

Saturday April 19
Four laps at a track at 1pm.

Monday April 21
Short lunchtime run with Ami. We ran a mile and then we walked the rest of the way. Neither of us were feeling great.

Tuesday April 22
Single loop around the lower lake at Ramapo Res. So this is how many fake zero days in a row?