Weight loss contest update (I am in two weight-loss contests right now.)
* Lifetime Fitness 90-Day challenge: Bodyfat percentage is down 14%, which is 3rd place in Montvale but not in the top 100 nationally.  If I was in the weight loss contest, my 10% would be first in montvale by a huge margin and 10th nationally. With a $10,000 grand prize, I'm really kicking myself for choosing the bodyfat option.
* Hertz "thinner winner" employee weight loss contest: 7.5lbs in two weeks. Which isn't bad, but it could be a lot better if more than 4 days of the 14-day period had significant drops.

Ash Wednesday March 5
Lots going on today (don't ask) do I did 2 miles quick as I can (16 minutes) on the treadmill at lunch.

Thursday March 6
Still really busy. Went to a glacier track and ran on the 6" deep ice surface for 5 laps, which took 15 minutes. I tripped once and sunk once in the first lap, but the next four laps were uneventful.

Friday March 7
Still busy. Worked from home in the morning, and got ten minutes on the treadmill (1.14 miles) at lunchtime when I arrived at the office. I was going to try to take a group exercise class in the afternoon, but it wasn't happening.

Saturday March 8
Finally a weekend day where I can relax. I relaxed by running 18 miles at Rockefeller State Park with Ami. Great run. Notably, I did the first 12 miles on a completely empty stomach, and then the next 6 on a slurry of beet juice, superstarch, and BCAAs. Energy levels were still off, but I can't deny that long runs on zero calories are getting easier. Perhaps the fat adaptation is really kicking in now.

I will say that the weather is really kicking in. This run started out at 35º, but ended at near 55º. The plowed parts of Rockefeller (which are actually outside the bounds of the State Park) had an amazing clear and dry running surface, but the majority of the park, which is unplowed, had an uneven glacier surface that didn't soften up before we finished our run, limiting us to (mostly) the farms. We did try to run the glacier, but it was difficult and I was worried about twisting my bum ankle. 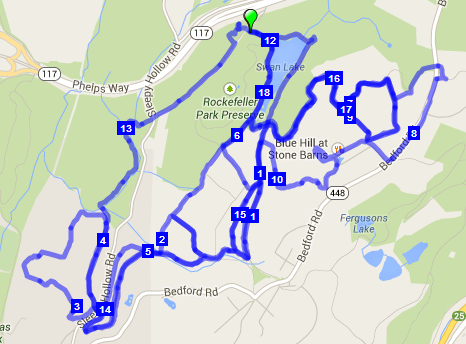 Sunday March 9
So the weight loss are still going, but I'm in the second plateau and this one is worst than the first. It's really annoying. These plateaus are a total pain in the ass. Consider that yesterday I ran 18 miles, 12 of them on an empty stomach and 6 on some beet juice, had smoothie after the run, a small lunch, and skipped dinner because I wasn't hungry. How is it possible that I'm UP 0.2lbs this morning? Plateaus, that's how. F-ing plateaus.
Bowling this week: 167-146-182, 495 series. OK given how I've been doing lately.

Monday March 10
Went to the track at Mahwah High School, which was mostly clear of snow, and ran five laps.

Tuesday March 11
Lifetime Social running group. I hung out in the back of the pack with Carol. Lots of hills. 4.25 miles in an hour.